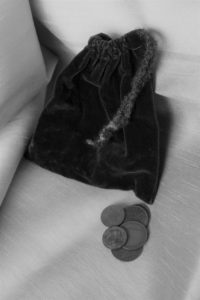 Then one of the Twelve – the one called Judas Iscariot – went to the chief priests and asked, ‘What are you willing to give me if I deliver him over to you?’ So they counted out for him thirty pieces of silver. From then on Judas watched for an opportunity to hand him over.

What can you buy for thirty pieces of silver? An injured slave would have cost about that back then – but who would pay for a slave who might never be any good for anything?
It’s gone down in history as an amount that one would pay to betray a friend, a teacher, a prophet of God.
Or maybe, a potential rebel leader who is proving reluctant to fulfil his role in Jewish history and lead the people to overthrow Rome?
The sum is pretty insignificant.
Maybe Judas was poor enough to see it as a good price?
Maybe the Chief Priests intended it to be the opening offer and would have gone much higher if pushed. If so, they got a bargain!
Judas was money-minded – the one who objected to the woman pouring expensive perfume on Jesus’ feet.
Money was a motivator for him. He held the Disciple’s common purse, so perhaps he had talents in that department that stemmed from an interest in profit.
But they trusted him – they all did, or he wouldn’t have been given the task.
Jesus chose him as one of the twelve Apostles. Had he trusted him at the beginning?
He trusted him at the end to do what was on his heart – to betray him and begin the downward slide to crucifixion. Was that why Jesus chose him?
And what good did thirty pieces of silver do him?
He took his own life. Why? – Regret, or despair that his plan failed? Did he just give up on his ideals and have nothing left to live for? Did he know that he had been the instrument of Satan and couldn’t live with the thought?
Who knows?
But a trusted member of the group was the one who sold Jesus out.

Once again, God in Jesus identifies himself with the lowest and the most down-trodden of society.

We don’t like to be reminded of the trade in human-beings. We want to think of it as something that was over with long ago. When we think about African men, women and children being torn from their homeland and treated worse than animals on American plantations we like to focus on the stories of the end of the African slave trade and content ourselves that we live in more civilized times.

There may not be slave markets in public places anymore, but people are still bought and sold cheap.

Judas got his money. He got what he wanted.

The price was paid.

But it wasn’t the Chief Priests who paid the real price. Jesus paid that.

He paid the price for all the dirty transactions in the world – past, present and future.

It cost him a lot more than thirty pieces of silver. It cost him everything.

Pray…
FOR OUR COMMUNITY
Pray for our property team – a group of committed and skilled people who give generously of their time to undertake no end of tasks to maintain our property, from decorating the toilets to decorating the Christmas tree!
FOR THE WORLD
Pray for all of those who quietly get on with the countless thankless tasks that keep our society running smoothly. There are many in unglamorous and poorly paid jobs, whose work we would not notice unless it wasn’t done. They deserve our gratitude!

O God our Father, we can never thank you enough for you love for us. Helps us to love you more each day.

Pray…
FOR OUR COMMUNITY
Pray for our church stewards. This is the group of people who arrive first and leave last each week, ensuring that we are all looked after, that the preachers are welcomed and that they have all they need, and that everything runs smoothly each Sunday.
FOR THE WORLD
Pray for all of those people who ‘arrive first and leave last’ – those who set up, clear away, and make sure events and venues run smoothly. Thank God that we all have different skills and gifts, and acknowledge the value of the jobs that stewards do.

What was he thinking? What got into Judas to make him behave in such a callous and treacherous way?

Was he plain evil – or did he just make the biggest mistake of his life?

Some say that he was trying to force Jesus’ hand – make him act – make him start the fight against the Romans. After all, the people loved him. He was the most popular man around. O.k., the Chief Priests were not so keen, but after the Romans were crushed and the Jews back in control of their own destiny, they would come around.

All Jesus needed was a little prod.

And he was the man for the job. It wouldn’t do him any harm, either. He could earn a bit of money on the side.

The Chief Priests would shake things up. They were easier for him to get at than the Romans, but they’d send the Temple guard to arrest Jesus and when Jesus fought back, the disciples would join in and others would be draw to the battle and the guard would soon be out-numbered. Once the fight was underway, there’d be no stopping it. All the rebels in different groups around the city would rally and the Romans would be taken by surprise.

And soon Jerusalem would be back in the hands of the Jews – just as God promised.

All Jesus needed was a little nudge.

Judas misunderstood what Jesus had come to do. So he betrayed him.

Pray…
FOR OUR COMMUNITY
Pray for primary school aged children who attend our local schools. Pray that as they grow, as well as their academic learning, they also learn the important lessons of friendship, courage and integrity.
FOR THE WORLD
Pray for access to basic education for children worldwide. Education is one of the main routes out of poverty, so pray that we may one day live in a world where education is available to all young children.

The Bible tells us that the love of money is the root of all evil.
Weeds are a nuisance but easy to get rid of if you just chop off the bit that shows! Getting the root out is the tricky bit.
That takes much effort and care – or there’s a bit left and before you know it, there are the weeds again.
The roots are the grubby bits hidden from the light that feed the weed and keep it firmly in the garden.
If the love of money is the root of all evil, then we have a problem!
And as we look around the world, love of money is behind so many crimes and wars. At best, people who love money can’t also love others – especially those who threaten the source of the income.
I think that it was the character ‘Lord Peter Wimsey’ who said “Where there’s a will, there’s a motive for murder.”
The desire for money leads people to commit all manner of crimes.
And money is power – at least in a worldly sense.
The heads of organised crime only hold onto their power because the can buy loyalty or silence or a high court judge.
It would seem that Judas fell foul of that one, too.
Thirty pieces of silver – enough for him to trade for his years as a disciple. Enough for him to trade for his master and friend. He must have wanted that money badly.
Lord, in a world that values money above love and self-sacrifice and generosity, please root out any love of money we have and forgive any moment when we have loved money more than you.

Pray…
FOR OUR COMMUNITY
Pray for secondary school aged children. Within our church community we only have a few young people in this age bracket. We pray that they may know how precious to us they are (why not seek someone out and tell them!). Help us to cherish and nurture them as they grow into young adults.
FOR THE WORLD
Pray for teenagers worldwide. In a world in which technology and social media have such an influence on the young generation, pray especially that vulnerable teenagers find the strength and support to be filled with positive self worth and that their social interactions and experiences wok for good in their lives, helping them to become compassionate and productive adults.

Denial, betrayal, cowardice, misunderstanding…. These disciples, what a bunch of ……. humans!

Why on earth did Jesus choose them?

They were uneducated and so slow. He could have called Scribes or Pharisees. At least they would have had a better grasp of the detail of Scripture.

They were not even fighting men. They turned out to be cowards. Perhaps he should have picked members of the Temple Guard. At least they would have been able to stand up in a fight.

They were just not on his wave-length. They had their own agendas. They were at odds with each other. They were ordinary people. They were people like us.

And that was the group Jesus chose. People like us. And he still chooses the ordinary, mildly dysfunctional, over enthusiastic or overly pessimistic people to serve him in his Church.

One of the disciples denied knowing him – because he we frightened of the consequences of people knowing he was one of Jesus’ followers.

Many of them misunderstood what Jesus was doing. They went along with it, but missed the point.

They all ran away when the chips were down – more interested in their own comfort and safety than being faithful.

One of them betrayed him – got tempted – gave in to greed and self-interest.

We’d never do such things, would we?

Pray…
FOR OUR COMMUNITY
Pray for 16 to 18 year olds – the point at which young people begin to discern the direction they are going to take in work or education. Some of our BBGA members fall into this group. We pray that they may truly begin to flourish as they develop their own gifts and skills in their learning.
FOR THE WORLD
Pray for all youngsters who are making decisions as to the direction they want to go in life. Pray that they may encounter wise encouragers and role models and that they may choose ways that are good.